When submitting your proposal, ensure to select the correct abbreviation of the infrastructure requested in the GATE application system. A summary of the instruments can be found here.

A call for user proposals for access to VIPERLAB infrastructures will be announced every year with a submission deadline and evaluation phase every quarter, as outlined in the sketch below. 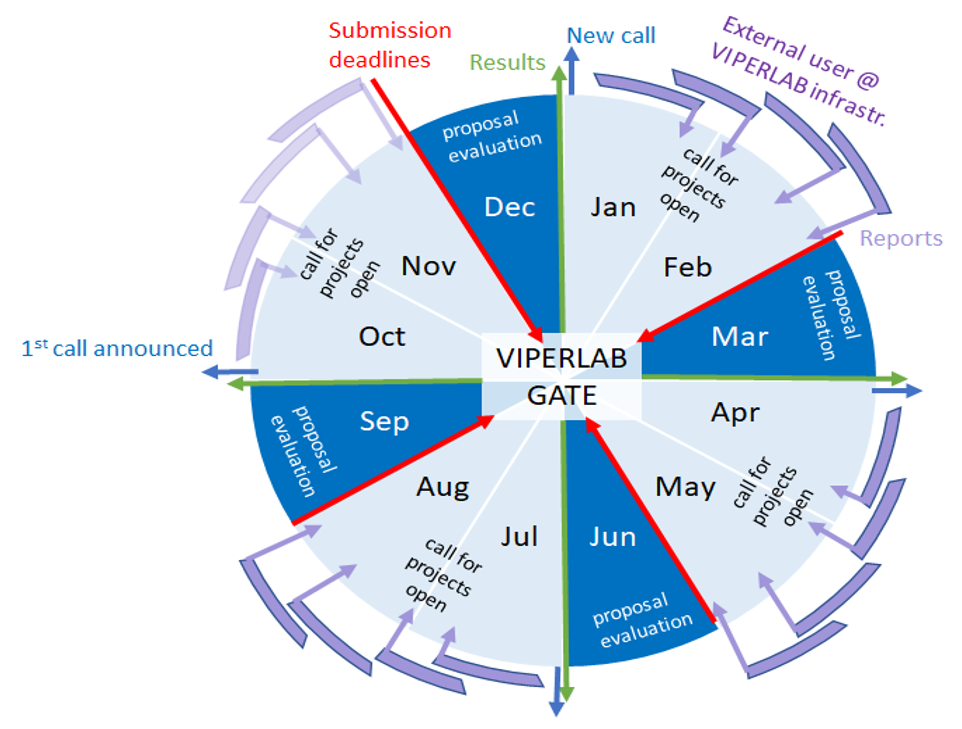 VIPERLAB provides transnational access to physical research infrastructures to selected ‘user-groups’ led by a ‘user group leader’. This criterium does not apply to virtual infrastructure access offered in VIPERLAB.

Transnational access means: the user group leader and the majority of the users must work in a European country other than the country where the physical research infrastructure is located.

This rule does not apply:

Only user groups that are able to scientifically disseminate the results generated as a result of VIPERLAB infrastructure access are eligible to apply.

Exceptions for this eligibility criterium are only made for users working for SMEs (see below).

Users working for or with industry of any size are welcome to apply for VIPERLAB access either as individuals or as part of a larger user group (e.g. with academic teams). Access is granted free-of-charge if the results of VIPERLAB access are published/disseminated with the exception detailed below.

Proposals for user access to VIPERLAB infrastructures consist of a scientific case and an experimental plan.

This document should be written in English and on maximum 1 page contain the following sections:

The experimental plan needs to detail:

Note, that specific details to be defined in the Experimental Plan will vary dependent on the infrastructure requested so please make sure to contact the instrument responsible for further details and assistance when drafting your experimental plan.

After proposal submission through GATE, users will receive an automated message confirming that the proposal was successfully submitted for evaluation.

The proposal will be evaluated by a scientific selection panel of internal and external VIPERLAB experts in a transparent, non-discriminatory, and fair process. The entire proposal evaluation process is handled via the by VIPERLAB-GATE platform in the steps outlined below:

The evaluation of VIPERLAB proposals is carried out in two steps:

Proposals for Physical Research Infrastructure Access will be evaluated by a Scientific Selection Panel consists of four external experts and additional VIPERLAB internal experts from the perovskite and/or silicon PV community.

The Selection Panel will evaluate and rank user proposal based on the Scientific Case.

User proposals will be granted when the majority of reviewing experts and recommend the execution of the user proposal.

In case a proposal for access to a particular infrastructure is not granted due to:

If infrastructures are over-requested and several proposals are deemed of similar scientific quality, priority will be given to users or user groups who:

Academic and SME users are eligible for travel reimbursements (see details below).

Once your proposal has been granted you can take steps to carry out your project as intended. Apart from planning your trip and preparing for the experiments, please make sure to discuss with your local point of contact (infrastructure responsible) about any other administrative steps that might be necessary.

Once your VIPERLAB experiments have been completed, you will receive an automatic request from the GATE system to submit your experimental report.

Users of VIPERLAB infrastructures are eligible for a refund for travel expenses from VIPERLAB EU funding, if:

VIPERLAB users will get a reimbursement for travel costs (up to 500 EUR per trip), accommodation costs (hotel/hostel: max. 100 EUR / night) and a daily allowance (max. 25 EUR).

Requests for travel reimbursements need to be submitted to and will be handled directly by the VIPERLAB partner where the experiments has been carried out.

The user/user group declares to accept the following:

VIPERLAB consortium may revise at any time the terms of this Agreement without notice.

This website uses technical, analytics and third parties cookies to get statistical data processing and quality control, and to allow you to share information with social networks. Please note that if you use the functions that interact with social networks, these could track your navigation with their cookies. To learn more on all our cookies, how to disable them or deny your consent, please read the privacy policy.

You have declined cookies. This decision can be reversed.

You have allowed cookies to be placed on your computer. This decision can be reversed.

This website uses technical, analytics and third parties cookies to get statistical data processing and quality control, and to allow you to share information with social networks. Please note that if you use the functions that interact with social networks, these could track your navigation with their cookies. To learn more on all our cookies, how to disable them or deny your consent, please read the privacy policy.